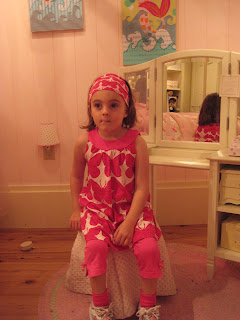 As per our last visit with Elizabeth's Movement Disorder Neurologist dystonia is the the new diagnosis. She feels that Elizabeth is not Ataxic at all or low tone but her movement difficulties are due to dystonia. Despite us thinking she is really improving she feels that Elizabeth is significantly impacted by dystonia. As the Sinimet made her worse she wants to try Artane, this medication has to be gradually increased and results may not be seen until optimal dosage (in 3 months), she feels that Artane may help alleviate some of her symptoms and improve her speech. She also feels that in the future we should think about Deep Brain Stimulation as it has shown to have amazing results with dystonia. I have read about DBS in the past but did not think it was offered in Canada but it is completed at Sick Kids and her Dr. thinks Elizabeth would be a very good candidate. The earliest DPS can be done is around 7 years which is good as it gives us lots of time to contemplate whether brain surgery is appropriate as it is something we can't even begin to think about. The Dr. feels that we have to address her dystonia as she will encounter bony changes to her spine and legs if not addressed. We do see changes to her Rt. knee and it is causing a fair amount of pain so we are seeing the Orthopedic Surgeon soon. We ended the appointment with spinal x-rays which were a bit humorous as it requires Elizabeth to stand still which is impossible even with 2 adults holding her still. Once again she milked a toy from me from the hospital bookstore as she so so good that I could not say no.
at 7/31/2009

That is a lot take in isn't it I image you can't stop thinking about this.

Gosh,
My heart goes out to you guys. It breaks my heart that these kids have to go through so much. Faith is having gastrox release surgery in Nov. and I am already a bundle of nerves. We will pray!

Your post sounds so matter-of-fact - or I cannot read your emotions on this.

If you have no reason to doubt this physician, getting an accurate diagnosis is the surest path to treatment.

I would be grateful for plenty of time before a surgery decision myself.

While not well known, I think, DBS has been around a while - so at least it is not 'experimental'.
Barbara

Barbara,
You are right I have not allowed myself to take all this in as I really don't know who to believe at this time. We have had so many diagnosis' that I cannot with a completely follow this Dr's lead and then extreme of brain surgery. I also am beginning to wonder how far to go and when we should come to terms with Elizabeth's limitations and avoid the search for perfection. I do see dystonia in Elizabeth but I don't think she is purely dystonic, I am not an expert but I work with many children with CP and I see more than just dystonia.

I often write with encouragement for acceptance and I have read your voice going in that direction (comments elsewhere, too). Acceptance offers so much mental health factor to the family. But I don't discourage parents from following their hearts for strong feelings that the diagnosis is not yet correct. (Miahysteria has blogged on this - in the end getting a secure diagnois.)

I agree that brain surgery is extreme, but I also get the willies (real professional language there) with casual mention of orthopedic surgery, too (gastroc lenghtening is so '70s). Not for Lizzy per se, but others with leg spasticity might want to explore a new surgical technique called PERCS. Actually, the age of the surgical procedure is only a part of the picture for considering a surgery.

Most important in my opinion is the skill of the surgeon. Which leads to - if medical care is at a big teaching hospital, ask specifically who will handle the scalpel. (Residents in training?)

I hope you will explore all non-surgical means for preserving her knee. At the same time, some nice things can be done surgically that cannot be obtained by any other means. All the best,
Barbara