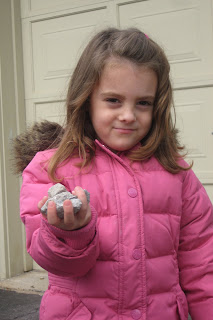 Elizabeth has had her first marriage proposal and declared her intention to marry a' handsome fella' as she calls him. The little boy who Elizabeth calls handsome is in Elizabeth's class and he himself is much like Elizabeth as he has a physical disability and has motor abilities are similar to Elizabeth. These two hit it off right away and frequently pair up during gross motor time to help each other out. Being the sweet little boy he is, he tries to help Elizabeth up the stairs holding her hand but it often turns into disaster as they are both unstable on their feet. He told the teacher his plans to marry Elizabeth so she told him he should ask her first, Elizabeth gladly accepted and the deal was sealed with some rocks which he gave her. Elizabeth has declared she will marry her prince when she is 16 (as well as getting her ears pierced).
I don't know who was more happier about their relationship his Mom, Elizabeth's teachers or myself. I hope these two remain friends when they get older as they have a bond and an understanding of each other that only they can comprehend.
at 11/22/2009

Awww that is the sweetest thing ever!!

That is lovely! And it is adorable that Elizabeth will wait until she is 16! :)