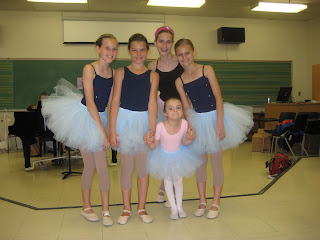 Elizabeth had her end of year dance recital in her adaptive dance class. The class worked so hard practicing all the steps and Elizabeth remembered the movements quite well. Elizabeth really enjoyed her dance class, her favourite thing about her dance class is the attention she gets from her helpers. Elizabeth has 2 helpers that hold each hand so she can complete the steps with their support. Her helpers are the sweetest girls who adore Elizabeth and are teaching her so much. On the night of the dress rehearsal her helpers were waiting at the door for her and presented her with a card wishing her luck and coached her though all the steps and how to present herself on stage.
I did not get to see Elizabeth perform as I was backstage to help her and supervise the class but from what I heard she did great. Hearing the thunderous clapping from the audience was proof that the whole class was inspiring.
at 6/22/2010

Awwww! I hope someone got some pictures of it! I bet she was the star of the show!

wow I love it!! That sounds so fabulous. Congratulations to Elizabeth!

thank you for your comment! please direct me to where the birth story is....i can't seem to find it! and yes, we certainly have more gray hairs now then before. :)

Love hear from her!!! She is adorable with tutù. Hope i write right in english....