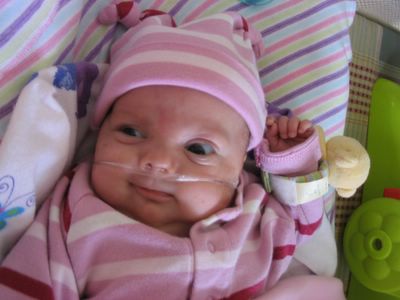 At over 7 lbs Elizabeth is getting quite chubby, each day her parents find new rolls of chub. Elizabeth has settled into a schedule and is sleeping for longer periods at night and awake lots during the day to play.
Elizabeth is meeting many of her developmental milestones such as holding her head up, smiling, reaching out and tracking with her eyes. Her mom and dad keep her busy with all the latest toys. This week she is to see the eye doctor again and next week is to have her hearing checked again. Her parents are still a bit concerned with her ears as she does not appear to respond to some noises, hopefully it is only selective hearing like her father.
She still needs the oxygen but is using less now, mom has been weaning her off so hopefully by the end of May she will no longer need it. Elizabeth has not had any apnea or bradycardia episodes for two weeks so hopefully she has grown out of those "preemie" moments. Her parents are very lucky to have such a wonderful baby with such an amazing personality and cherish every minute spent with her.
at 4/26/2005 4 comments: 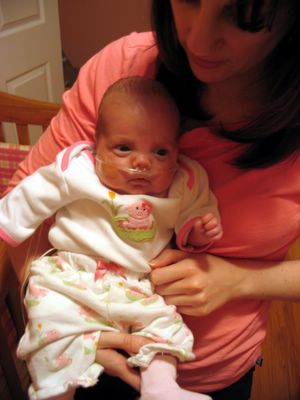 It has been over three weeks since Elizabeth came home and she is doing amazingly well. When she was weighed last weeks she was 6 pounds and 4 ounces (2.835 kilograms). At the Growth and Development clinic that Elizabeth attended on Thursday, the dietician said that her weight gain was exceptional. She placed in the tenth percentile on the growth chart. Her height was in the fifth percentile at 20 inches (...Have you met her mother?).
The eye doctor said that her eyes are improving which is great since her favourite past-time is staring in the mirror.
The head ultrasound showed ruminants of old brain bleeds that are slowly being absorbed, nothing new.
Elizabeth is still on oxygen, but only on half of what she was getting when she first came home. She still reminds her parents that she is a preemie by having the occasional apnea or Brady spell, but they also seems to get less frequent.
She has lots of awake times and loves snuggling. Yesterday she went for another walk outside with her mom and Laurie.
at 4/17/2005 1 comment:

Elizabeth has been home for about one and a half weeks and has done great. She is still getting small amount of oxygen (continuously). She came off the caffeine three days ago and wasn't quite herself for the first couple of days. Today she was in a much happier.
She had her first visit at the doctor's office last Thursday, which went reasonably well (she ended up getting the RSV shot). Elizabeth weighed 5 pounds and 1.5 ounces (2.31 kilograms) and was 43 centimeters long.
She has three appointments this week. A visit to the doctors, followed by a head ultrasound at JB hospital and an eye exam at Mac... She is a busy girl.
at 4/03/2005 1 comment: 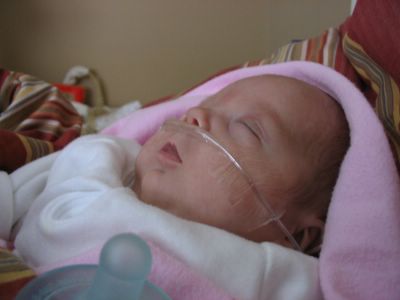