Elizabeth is now over 3 lbs (1364 grams) and her skin is filling out. She has a double chin! She is a happy baby, rarely cries has big smiles and keeps herself busy by looking out of her isolette when she is awake.
She comes out for cuddles twice a day with her mom and dad who read her stories and sing songs (mom does most of the singing).
Reflux is still a problem for Elizabeth. During her last CPAP set-back she was again put on continuous feeds. During the week her doctors and nurses decreased changed the period of time to 1 hour (she is getting 18 ml. of milk over a period of 1 hour). She is also getting medication for the reflux, and it seems to be help. The nurses have said that she should outgrow this by 37 weeks.
Elizabeth still practices breastfeeding (with mom only) and loves it, but she gets tired. If she is able to tolerate feeds over .5 hours she will likely go to another hospital by the end of the week.
at 2/27/2005 5 comments: 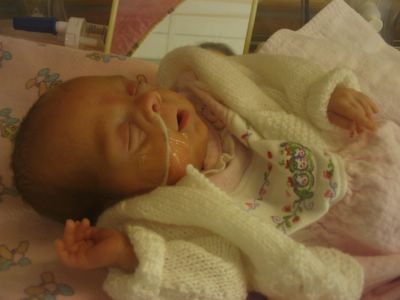 Towards the end of last week and during the weekend Elizabeth felt pretty good and would often come out of her isolette for cuddles with her mom and dad.
Early Monday morning she had to go back on CPAP, because during the night her oxygen levels had dropped significantly (several times) and she did not respond well when her nurse increased her Low Flow. Her nurses and doctors suspect that it was a combination of fatigue and reflux that caused her to de-sat. After all, she is still only 34 weeks and should not be expected to do so much work (breathe, keep her own temp, digest food and even put up with her dad's singing).
For the last two days, Elizabeth has been crying. She looked extremely sad and disappointed because she had to have the CPAP mask on.
Her nurse tonight took the CPAP off and while Elizabeth's mom and dad were there she did pretty well on the Low Flow. She is also receiving medication for the reflux.
Elizabeth's last blood test show that her bone marrow is slowly waking up. This means that she will be able to produce her own hemoglobin, which she doesn't have very much of.
at 2/22/2005 4 comments: 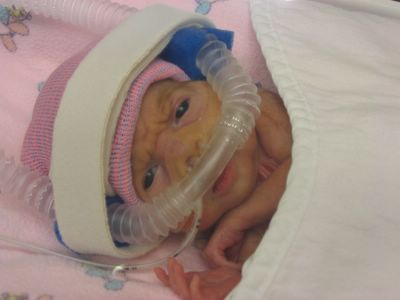 Little Elizabeth was a little tired today. She is still about 6 weeks away from her original birth date (end of March), but she has come a long way. Every day she is maturing and gaining weight. Tonight she was 1215 grams and cuter than ever. Her dad gave her a bath, and Elizabeth cried at first but didn't complain too much once in the warm water.

She is still getting 15 to 16 ml of milk every 2 hours. The doctors have decided not to push her too much. Her belly is not mature and her reflux is still there. So, moving her to a different hospital is on hold for now too. Her mom has tried breast feeding several times for practice. Elizabeth seems to know what she is doing, which is a great sign.
at 2/17/2005 3 comments: 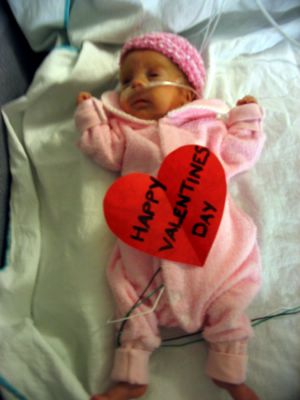 Elizabeth tipped the scale at 1108 grams, just prior to getting a bath from her mom and dad last night. She is catching up!
Her doctors and nurses have decided not to change her feeds for now, since she is refluxing every time she feeds. She does better when her mom or dad are holding her.
Elizabeth had her first eye exam on Thursday and the doctor did not seen anything of concern. She said that Elizabeth's retinas are still very immature. She will get another eye exam in four weeks.
at 2/12/2005 5 comments: 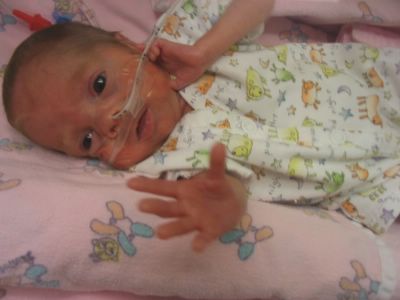 Elizabeth had a pretty good weekend. Today is her 52nd day at McMaster Hospital. She is able to sleep more since she received her last dose of DEX. She has slowly gaining the much needed weight. The chubbier the better! Her feeds were increased to 6.5 ccs per hour from 6. She is still being watched because she is getting reflux, which has become more frequent now that she is getting more milk. The reflux is causing her heart rate and oxygen level to drop below the norm for short periods of time. This is likely due to her premature stomach, which she will hopefully outgrow soon.
She is still on Low Flow but is getting minimal support.
The doctors have told us that soon she may be transferred to another hospital as she will not meed as much care as before. They have assured us that this will not happen unless Elizabeth is able to breathe on her own and her stomach has matured so she can tolerate her feeds. 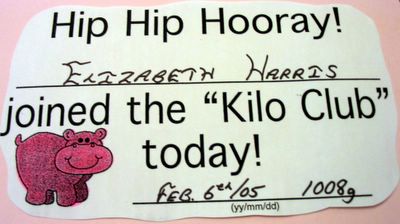 Elizabeth's mom and dad were excited to find this certificate next to her bed.
at 2/07/2005 4 comments: 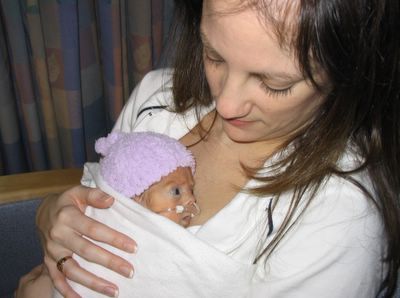 Today was Elizabeth's last day on DEX. She will continue to get another kind of medication which is inhaled to help her transition. Hopefully the medications will work as expected and she will not require CPAP again. She is still on the "Low Flow".
Yesterday Elizabeth had another blood transfusion because she was very pale and her pulse was dropping at times. Now she is pink again.
Today she weighted 915 grams (over 2 lbs) and is 33.5 centimeters (13.2 inches) long.
She is tolerating her feeds, which are fortified with extra calories and vitamins to help with the weight gain.
Elizabeth got her first bath in the "big girl" tub and she loved it, but it tired her out.
Her favourite toy is the soother. She works very hard at keeping it in, but when it falls out her backup plan is to scream until the big people put it back in.