Thank You to All 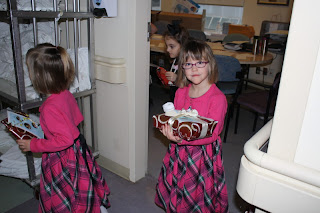 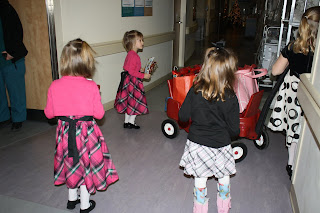 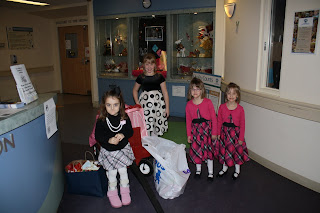 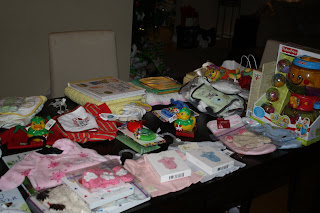 Elizabeth's Christmas project for the babies in the NICU went perfectly. The donations we received from family and friends were amazing, we even received gifts from New York and Pennsylvania (thank you Anne and Abby). As you can see in the pictures the gifts were endless we received blankets, toys, hand knit hats & blankets, clothing, books and Christmas keepsakes.
With the help of Angela who has beautiful twin girls who were also born premature we stayed up late wrapped each gift and attached a card which had the girls pictures and how small they were when they entered the world.
On Christmas Eve Elizabeth, Meredith, Courtney and their big sister Kaitlyn delivered the gifts to the NICU. We had planned a drop off at the door but the Charge Nurse had us bring them down the hall in the NICU. We were not prepared to enter the doors to where everything began as even now it still brings back some scary memories that we try not to relive.
Elizabeth was so excited to bring the gifts for the babies and was so concerned about the 'tiny baby birds' as she calls herself when she looks at her NICU pictures.
I am sure the gifts from everyone will be cherished by the new parents who are with their babies in the NICU this Christmas.
Thank you to all who helped out with our new Christmas tradition.
at 12/26/2010 2 comments: 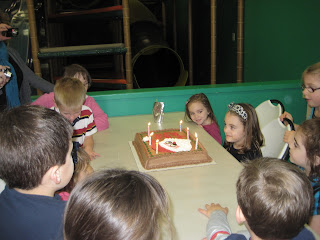 Elizabeth is now officially 6 years old. Over the past week she has had endless cakes and get-togethers for her birthday. The first party was with her friends at a local indoor playground where she celebrated her birthday with close to 20 friends. I am so happy see the relationships she is developing with other children some who are family friends but others who she has met at school. On the day of her birthday Elizabeth was invited to a Christmas party for a girl in her class and it warmed my heart to see this little girl tell the other kids that Elizabeth was to go first because it was her birthday and her mom had added candles to the cupcakes and all the kids sang Happy Birthday, this was another affirmation of the choice we had made for her school as there are some great children and families who we are getting to know. Mommy and Daddy bought Elizabeth Barbie and her horse Tawny which she loves and a Nintendo DS which she has figured out all ready and loves playing.
It hard to believe that only 6 years ago we were had just begun a hellish nightmare and now we have a witty sweet little girl who we are so proud of.

A letter to Santa 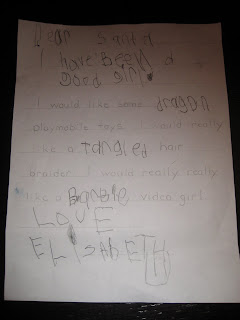 Elizabeth has finalized her requests to Santa and worked hard on her letter. She has surprised us completely and has asked for Barbies this year. She has 2 Barbies already and lately she has been playing with them which I love to watch. Her new daycare has 2 little girls and I think their interests are rubbing off on her. I am fairly sure Santa will happily oblige and ensure the Barbies she has asked for will be under the tree.
As you can see in the letter her printing is getting much better with a weighted mitten she has more control and her letters are getting smaller. She is on a waitlist to be assessed for a computer as writing is difficult, slow and is beginning to frustrate her. We are confident that her printing will continue to improve so she can complete short written works at school.

I let my guard down

Things have been very good in the barf department for Elizabeth. She had gone 4-5 months without vomiting and is eating quite well (I won't count getting car sick on her Halloween costume because Daddy let her read her book in the car). Because of her long vomit free spell at some point I stopped doing a cursory check for garbage cans and quick escape routes. This left me ill prepared at her last Dentist appointment.
I think a series of events led to her mass explosion across the room and at the poor Dental Hygienist but she did give us a warning (I'm gonna barf)but my previous quick reflexes (I have been able to slide a bowl across a table and catch her dinner) and not knowing where the garbage can was left her and the office in a mess. Poor kid had to go home in the cold in her winter coat and underwear.
The plan for next time; no cookie dough tooth polish, she is not to lie flat and only afternoon appointments (she is pretty gaggy in the mornings). This little episode, a frequent cough and her gagging through breakfast is leading me to think that reflux is still not a thing in the past. Maybe we should invest in one of these, I do find Ziploc bags are great but it would be nice if they were not clear.