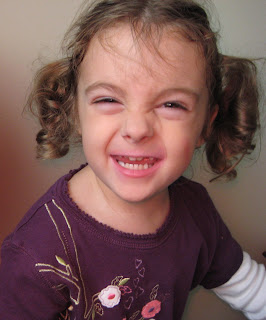 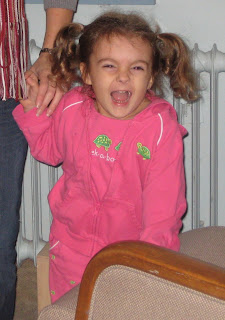 Free Spirited, impish and tenacious are words I hear often to describe Elizabeth. I agree these are words that best describe her. I know once she enters school the phone calls from the principals office will begin. She has a will of her own that is unstoppable at times. She is not naughty or aggressive and does follow what I ask of her (most often) but she is impish and free spirited. She frequently teases her best friend Owen by poking him in the ear or tries to take his toys, when she does not even want them. Her most recent letter home stated because she was not listening her toy had to be taken away by her teacher and when I discussed this with her why she needs to listen she replied 'that's okay I will steal it back on Monday'. Time-out as infrequent as it is here is often not a punishment as she sings away on the step, once she can go she promises me 'don't worry Mom I promise I won't do that again'. She really is an unstoppable force at times and boy can it be exhausting.
at 11/20/2008 4 comments: 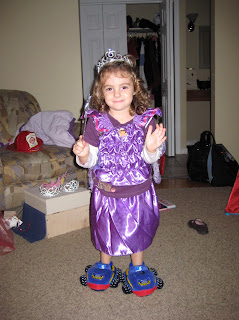 In light to our recent concerns with Elizabeth's socialization I am trying to ensure that we are also engaging in appropriate play. We spend so much time in therapy making sure she meets all her goals that we forget how much she learns from just playing. Elizabeth by far prefers to play smash up cars and trains so I am trying to encourage her to play with dolls or other domesticated activities. This week we have been playing shopping we arrange our store with clothes, candy, food and toys and get the cash register ready. Elizabeth while playing clothing store dressed up and of course her outfit was not complete without her Cars slippers. Once she had her wand she wanted to play sword fights because that is ' what fairies do'.
at 11/09/2008 4 comments:

Elizabeth had a great Halloween. I really think Halloween is more exciting to her than Christmas. She had decorated the house inside and out, completed every Halloween craft imaginable, made her closet into a haunted house and baked Halloween treats. Her butterfly costume was a runner up to a bat costume she was eying, but the butterfly wings made the deal. She also dressed up as a cheerleader for school as the butterfly costume was too hot. She really liked the cheerleader costume as she thinks she is a cheerleader from High School Musical.

Hope everyone had a Happy Halloween! 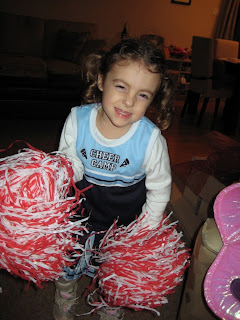 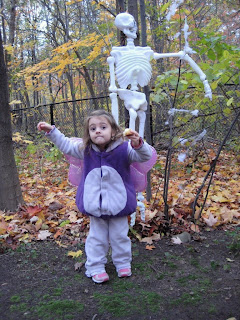