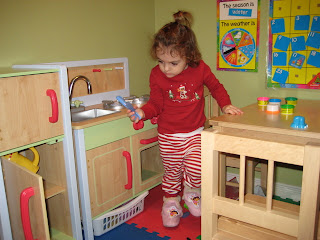 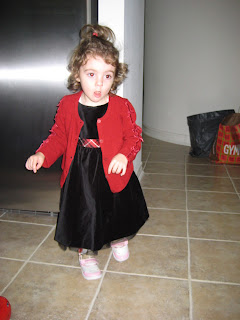 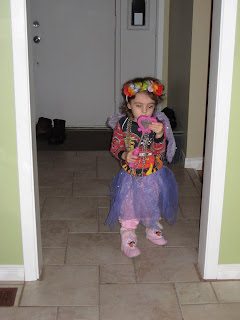 Elizabeth has had yet another amazing Christmas. Santa brought her exactly what she had asked for a Lightening McQueen race car that makes noises. Elizabeth loves the Disney movie Cars and loves anything to do with it, she has quite a collection of the race cars and she even has a Lightening McQueen pillow which she sleeps with. Santa also has brought her a play kitchen so she can cook with Mommy. Elizabeth attended Christmas Mass for the first time this year, she learned about 'Baby Jesus' and told the Pastor 'thanks' after she received a blessing. It was so much fun to see how much she understood Christmas this year and was able to participate in all the Christmas traditions and festivities.
This year Elizabeth also received a Secret Santa present from Lena and enjoyed dressing up in all the girly dress-up toys that Lena had sent. In joining a chat group for mothers who have children with Cerebral Palsy I have met a great group of women and this where her Secret Santa gift originated from.
at 12/26/2007

Ok - she just can't get any cuter. I am glad she had a great Christmas!!!

Love the new kitchen! Olivia and Avery are going to be all over that next time we have a play date at your house.

She is so adorable. I love the new Kitchen...I'm thinking the triplets need one for their 3rd birthday. Mack also loves Cars and I think mater and lightening were his favorite presents.

I am so glad that Elizabeth liked her dress-up clothes. I love the new kitchen, where did you find it? I will have to get one for Lena and Kassie when they are a little older.
Elizabeth is so adorable, I am glad you all had a wonderful holiday!
Would you mind linking to us in your sidebar too?