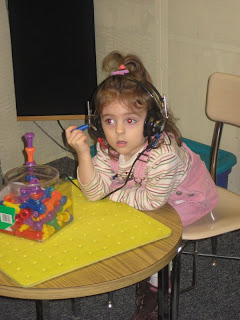 It has been a whirlwind the past 2 weeks. As Elizabeth is almost 3 corrected we have been visiting all her many Dr's some new and some old. Her first appointment started with her Orthopedic surgeon, she was quite concerned with Elizabeth's gait and unsteadiness and was very upset that we still do not have an MRI and a diagnosis. We have now been put on the urgent list and she also referred us to a Metabolic/Geneticist as she wants to make sure something has not been missed with Elizabeth. It was really nice for a Doctor to be genuinely concerned and going out of her way to help. Next was the Feeding Assessment clinic and to meet a new Gastroenterologist. They recommended a change in Elizabeth's reflux meds and a video-swallow assessment to rule out aspiration. Elizabeth had her yearly eye check and did so well, last year ended up with Elizabeth vomiting on the not too friendly Doctor. I was so proud of Elizabeth who read the letters across the room precisely. No glasses yet but probably in the future for short sightedness. One week after the referral we met with the Metabolic/Genetic Dr. he also does not know why Elizabeth has the difficulties she does as this is not something found with prematurity. He ordered some blood work to rule out other reasons for her ataxic symptoms and we will see him to review her MRI. Elizabeth was a champ during her blood work I was almost in tears, she cried initially and then was very interested in watching the blood and counting the tubes. Lastly we met with her Audiologist for her ear checks, we have been concerned as she is changing the letters in some of her words and has lost some of the sounds she had previously. Her Lt ear tested the worst we have ever seen but it also showed congestion so we are not too sure how accurate it was. She still has a loss in the high frequencies but quite minimal. Elizabeth does so well listening with her headphones on and putting the pegs on when she hears a beep.
It has been a crazy 2 weeks and still more appointments to come but Elizabeth wows me at how grown up she is and what a great girl she is. When she wakes up in the morning she asks 'Momma where are we going to go today?'. I can't wait to say nowhere, we are staying HOME.
at 3/05/2008

I cannot get over how grown up she looks in this picture!!

Hope you are all well. Thanks for having us over we had a great time. Hopefully we'll see you soon.