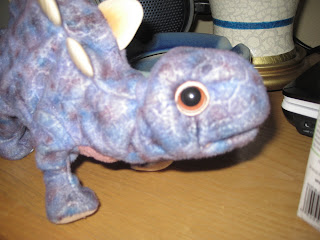 Elizabeth now can say the 's' sound. She has been working very hard at speech therapy for at least the past year and now can say 's' unprompted. I love how she asks for her dinosaur steggie, she pronounces the 's' sound so well, it warms me each time I hear her. We are now working on her 'sh' sound which is coming along and she can now say it with prompting. Above is a picture which she took of one of her 'crew' as she calls them she also has a t-rex, triceratops and a pterodactyl. She totes these dino's everywhere she feeds them, talks to them and dresses them. She also loves to bring them to us each morning when she wakes, a roaring dinosaur in your ear at 6:00 is not my most favorite way to wake up but they are the closest thing we have to dolls here.
at 5/16/2010

That is a cute Dinosaur. I'd love a dino wake up call from Ashley, I guess I can't complain she likes to sleep in and read books in her bed until I come and get her she never wakes me anymore. That's awesome Elizabeth is getting "s" sound .. i'm sure there was a lot of hard work put into that. Sssuper!!!!

YEAH! Way to go Elizabeth! That surely is a big accomplishment! Dancing in S.C. for you, tonight!