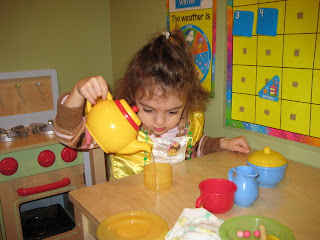 We knew it would come and we are really lucky that Elizabeth had lasted until February before she got really sick. Elizabeth has been battling a cold for the past week which had the appearance of RSV. Every night I would listen to her chest to make sure it was clear as she had high temps and a congestive cough on Friday when I got home from work, Grandma was quite concerned as Elizabeth was very restless, short of breath and her cough was even worse. When I listened to her chest I heard crackles in her right lung so off we went to the hospital. After nine hours of waiting they confirmed what I had told them nine hours earlier that Elizabeth had pneumonia in her Rt. lower lobe. Elizabeth really didn't enjoy the x-ray this time as they pinned her in a tube like contraption, last time she happily called out cheese when the took her x-ray. Elizabeth was so good she hardly complained despite feeling very unwell and staying out until 3:00 in the morning. She is now on the mend on antibiotics and her puffers, she still gets out of breath quickly but is beginning to catch her breath enough to boss us around and has started walking again. Every time she gets sick she goes right back to crawling as she is so off balance. She again is enjoying the opportunity to watch all her t.v. shows, having breakfast in bed and getting out of therapy (she missed 6 appointments last week). Hopefully she will be better by Valentine's day, they are having a Valentine's dance at her school and she has already chosen her dance partners (Owen and Cormick, she really has a thing for blonds).
at 2/10/2008

I'm so sorry to hear you guys are going through this. It's not fun for the little one's or the parents.

I'll be thinking of you and hoping for a speedy recovery.

There are two little girl's over here who really need a play date with Elizabeth. They keep telling me everyday!!

Oh I hope she gets better soooon! She is such a cutie pie, tough to see her sick. Hang in there!!!!