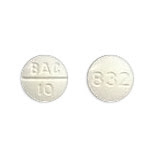 I did it again, a little white lie to appease one of Elizabeth's Doctors. In December we met with one of her Neurologist's and I had mentioned that Elizabeth had been having the nightly pain in her knees and that she was becoming tight in her hamstrings and rotators. We are definitely concerned with Elizabeth's new found tightness as she is more of a low tone kid and her higher tone is causing difficulty with her sitting. Because of our concerns her Dr. wanted to start a trial of Baclofen. Baclofen is most often used for children with very high tone as it is a muscle relaxant. Baclofen can have side effects of drowsiness, dizziness, vomiting and weakness. Baclofen will reduce Elizabeth's tone and would make her difficultly with walking worse and her hyperextension worse. Despite me trying explain that I did not feel this was the best option for Elizabeth she hurried us out with a script for Baclofen and I was to call in 1 month to let her know how it was working.
After having a chat with one of Elizabeth's other Dr's it was agreed Baclofen was probably not the best option for Elizabeth. So to avoid getting kicked out of the specialized clinic (we have been kicked out of a clinic before because I sought a second opinion) I told a bit of a white lie I called and said that we did try the Baclofen and it made Elizabeth worse with her balance and mood and we stopped giving it to her. I felt really bad in doing it but it is also important that we stay in the specialized clinic.
These times really make me wonder if I did not have the educational background as a Nurse for children with Developmental Disabilities where would Elizabeth be? I just think of the many families I meet who english is not their first language or the parents who do not question their children's Doctor what happens to these children? Sometimes Doctor's are on their own agenda and no matter how you try to explain your child they are not listening because of this I have to sometimes tell a white lie.
at 1/12/2010

It's unfortunate that it has to be that way. We have has some similar experiences with doctors who wouldn't listen no matter what I said!

Hi, A.
Just came back to ask you to visit:
http://hollydgray.blogspot.com/
(You may have already been there before....) New dx of dystonia and recommendation for artane. Child is much younger than Lizzie. Thanks. Barbara

I think you made the right decision. Obviously, I am not well researched on Baclofen, and really only know about it from posts on the CP Moms group, but it seems kind of obvious that it wouldn't be a good choice for kids with underlying low tone??? I thought it was generally recommended for those kiddos with severe rigid tone throughout their bodies. I wouldn't give it to Eden, and would definitely question a doctor's expertise if they were to recommend it. In fact, I don't think I would go back to a doctor who would recommend it!

I'm glad that you handled it this way. And I agree wholeheartedly that parents need to feel more empowered to question doctors' (and other professionals') judgments sometimes. We've obviously been down the same road and, even though neither of us are in the medical field, both of us are copious researchers who take little on face value. That helps, but we get in trouble a bunch too. Still, we parents know our kids better than the professionals do, and so as long as we are questioning and challenging from a place of reality-based enlightenment, I think that's a very good thing. So, as usual, hats off to you for doing this (and posting about it, too).

More on point this time...I've been thinking, trying to decide whether 'the system' promotes this kind of dilemma. Thinking, no. A patient can be 'kicked out' of either 'system'.

I'm sure many patients white-lie with little thought or any regret all the time. Ultimately, the patients (and their parents) are the ones who feel the consequences of whatever is decided ('bunch of trouble' sometimes).