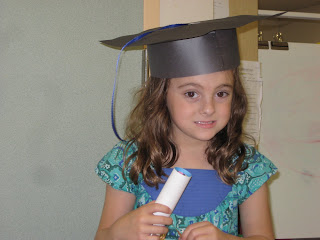 Elizabeth is officially done kindergarten and will be a big girl in grade 1 next year. Her class had a small celebration with some songs and treats which was cute. I have to say this year was not a memorable year for her at school and I hope that grade 1 will be better for her. I don't think her teacher understood (or wanted to understand Elizabeth's differences) Elizabeth's differences were almost an annoyance for her teacher and it did lead to some conversations and promises that things will be better next year. I hope the complaints of her 'selective hearing' and inability to keep still will be less and her new teacher will understand that her Auditory Dsysncrony and her CP are things she cannot control as hard as she tries. We are very blessed to have a great Special Education teacher who advocates for Elizabeth and works with her weekly.
Academically we are not worried for her, she does have some problems with numbers but we will work hard over the summer. Her report card of course showed her difficulty with paying attention (but that as explained is due to her ADD) and of course her printing is still behind and will have to be accommodated when she is required to do more written work.
Socially she has made huge gains and our previous concerns are less than before. She does at times want to be by herself to play and does voice that she cannot catch up to the kids when they play (I will address that with them next year when she is outside at recess). I can't say she has a close friend but there are a couple girls who she plays with and at least once a week she brings home a dinosaur picture/book from a friend at school.
I can't believe that in the fall she will be gone to school all day. It is a bit sappy but I still miss her when I don't see her all day when I am working. I am pretty worried how exhausted she will be as a full day will be very tiring for her but she will get used to it.
Now we have 2 months to enjoy the sun and have fun.
at 7/07/2011

Enjoy the summer! Elizabeth is adorable in her cap! And here is to a more understanding teacher next year.

congrats, elizabeth! first grade is a big step but you'll do great!