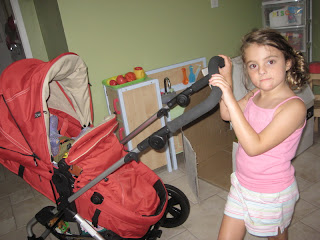 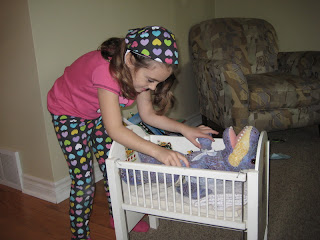 Elizabeth has been busy getting ready for her new role as a big sister. I think she would much rather have a baby dino for a brother (or even name him Dino) but I think she will be happy with who's hiding in my expanding tummy. Her dino Rexy has became her official baby; she changes his diaper, tucks him in his crib, feeds him, takes him for walks and now he is often given the privilege of wearing her baby brother's outfits (which are mostly dinosaur print). She is really trying to help out at home and states 'don't worry Momma I know you can't bend down I 'll get that for you' quite frequently.
As for how things are going for me I feel great usual, I am definitely bigger than I was with Elizabeth but so far if is mostly belly, I still have never ending contractions and am happy to report no cervical changes. I still am hanging out at home most of the time but am allowed to be on my feet for 1/2hr at a time so I do allow myself a quick errand or will take Elizabeth to a nearby appointment, that 1/2 hr really flies so I must plan my adventure perfectly. A major milestone is now I am in my third trimester which is super cool.
at 10/04/2011

Yay to a third trimester! So glad to hear it. Elizabeth looks like she is enjoying her soon-to-be new role and it is super sweet how she likes to help you.

so glad you've made it to the third trimester...keep hanging in there. that baby needs a couple more weeks! ;)

Elizabeth is going to be a wonderful big sister.. that's one very lucky boy. I'm thrilled to read your in your third trimester that is amazing!!!

Very happy for you!