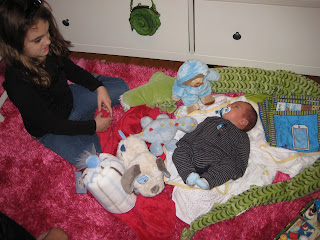 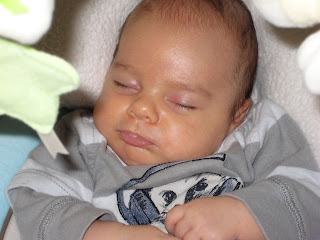 Our little man came into this world yelling and he seems to still be doing so. He is a man who knows what he wants and he wants it NOW. Slowly he is calming down and beginning to trust me and believe that I really won't starve him or drop him and he can occasionally be seen flashing a smile and cooing now. Despite his ferocious yell Elizabeth adores him and wants to spend every second with him (except when he yells). She loves to make a play gym for him in her room and he really likes being in her room (which is good because he dislikes our room, the family room and his room he tolerates). He is calm with her and will often fall asleep in her arms and she was the only one he would take a soother from.
Already he/we have sorted out a schedule and he has specific times for naps, bedtime and playtime which is really nice.
This little man may not stay too little as he tipped the scales at 9.2 lbs on his 1 month visit. He is developing some very chubby rolls that are so sweet. He continues to nurse and the 2 of us often have disagreements about how often to eat and I have yet to win these battles as his hourly evening feelings can be tiresome.
He gave us a big scare on New Years day and did what his sister was so good at doing and turned a very scary shade of blue/gray thankfully Mommy was home as Daddy was a bit panicked and after some hard whacks his color returned. We will be seeing a Pediatrician tomorrow for this episode and also he has had a few vomiting out of nose/choking episodes if jostled too much and I now am wondering if some of his crying is not just temperament it is that he is uncomfortable. Holding him upright for 20-30 minutes after he eats keeps him comfortable and with limited spitting up but it is leaving me with not getting anything accomplished and very sore arms. I have been getting quite creative with the baby carrier in the mornings when I need to get Elizabeth to school I can do almost everything while wearing him after he has eaten or while he eats, as I have told Elizabeth sometimes there will be desperate times.
at 1/18/2012

is he trying to go for charlie's speed weight gain record? lol! at 1 month he was 10 pounds. he is now 20 pounds 10 ounces at 5 months! do you have a wrap carrier? i hope you get everything sorted out with him and he turns into a happy guy. life is no fun with a fussy man. charlie still is a tough cookie and i can't wait until the day he finally lightens up a bit!

wow he's doing a great job with the weight gain. Glad to hear your doing well and managing through the mornings that's the hardest time of day for me still is and my baby is 2 going 3 I have no excuse any more now do I.

So sweet! Thanks so much for sharing him!