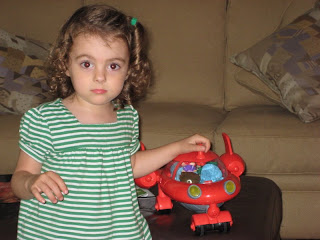 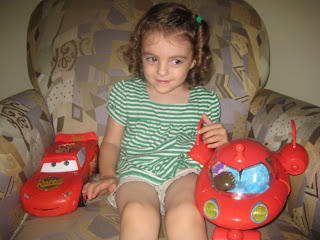 Yes it is true Elizabeth's Lightening McQueen car is now competing for her attention. Rocket from The Little Einsteins is now at close second for Elizabeth's favourite toy. Elizabeth since seeing the movie Cars a year ago is obsessed with anything with Lightening McQueen on it. Much to her dismay Mommy refused to buy her Lightening McQueen crocs when they came out but did settle for a Lightening Jibitz instead. She wears Cars pajama's and pull-up's and envies all the boys with their Cars clothing and backpacks. She has a large selection of Cars toys, pillow's and books. She most often plays with her talking Lightening and loves to bang his nose into objects (or parents) and loves to hear him yell 'ouch'. She spends hours racing her cars down a speedway we have made and also enjoys pushing Lightening around in her stroller (no dolls, just cars). But since Rocket has come into the picture Lightening has been in the sidelines and now she plays games with the characters from The Little Einsteins and seems to have a little crush on Leo. She watches Little Einsteins faithfully each night, squealing throughout the show and ensures that one of her parents is watching it as passionately as she is.
at 6/20/2008

I bought princess pull-ups for the girls and Cars pull-ups for Mack. Sophie wants to wear the Cars and not the princess ones. That's okay with me...I like "McQueen" better too.

Nathan LOVES McQueen also. We are actually on our second DVD as the boys wore the first one out. I think I have watched that movie at least 100 times.

Rocket was Holland's big gift from Santa last year. It continues to be one of her favorite toys, and she ALWAYS has to "be" Leo. Eden likes to be June:)

We don't have the big talking McQueen, but hmmmm. It might make a good birthday present.

Is Elizabeth into Thomas at all? Thomas holds the top spot at our house. We love all things Thomas.